The editor receives manuscripts that have not been published previously by under consideration for publication elsewhere. Some issues or topics in nursing include, but are not limited to the following: 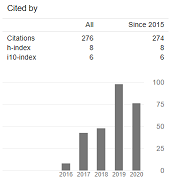