The Journal Sospol supports topics of publication covering domestic and international issues dealing with social politics field of research. The Journal Sospol aims to explore knowledge and contribute to policy recommendation due to response state and society problems through intellectual perspectives.

The topics addressed within the journal include;

On the first publication, we used the title “Sospol: Jurnal Ilmu Sosial dan Ilmu Politik”. It published 2 (two) issues in a year. Volume 1 published in March 2011 and September 2011. It is written in Bahasa Indonesia by printed version ISSN 2088-8090.

Due to technical problems, unfortunately, Volume 2 of Journal Sospol published in November 2016 with a single issue. It was the beginning of Journal Sospol accepted articles written in English as a foreign language. The publisher – PKSP released its online version in cooperation with Research and Community Services Directorate (DPPM) of Universitas Muhammadiyah Malang.

In 2017, Journal Sospol released its new cover and template. Journal Sospol stands for Journal of Social Politics. It has new structural organization of management and published twice a year during January-June for Issue 1 and July-December for Issue 2. Vol 3 No 2 (2017) officially published online by e-ISSN 2597-6648.

We got national accredited (SINTA 4) in 2018 starts from publication Vol 2 No 1 (2016) and going to higher rank in 2019. Journal Sospol is indexed by Google scholars and ISJD LIPI. We hope to be one of acknowledge world academics reference and stands for support research sustainability of scholars from within and outside the country. 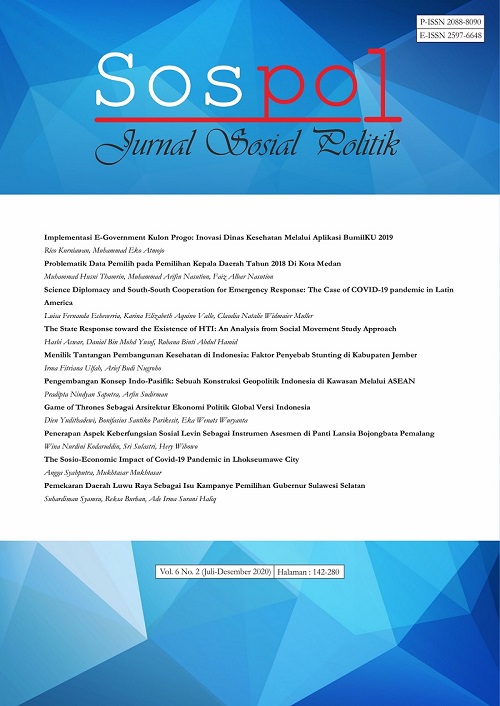 Based on a work at http://ejournal.umm.ac.id/index.php/sospol